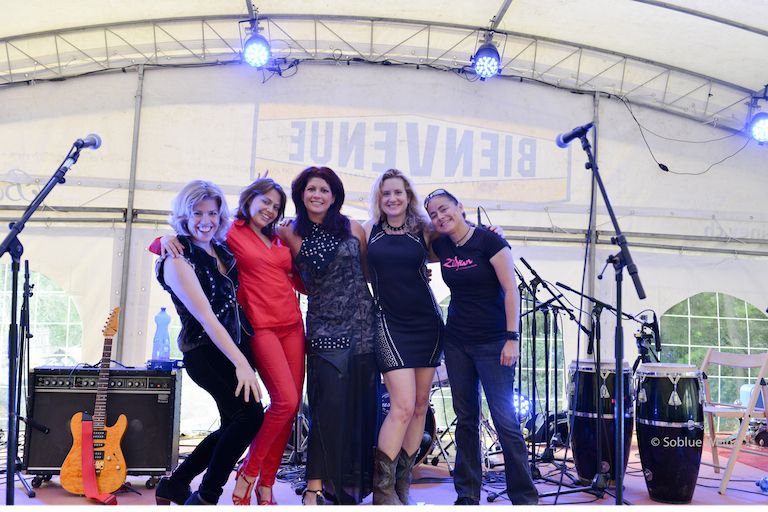 Five beautiful ladies and killer musicians joined forces to rock and roll with screaming guitar solos, thundering drum rolls, funkafied bass lines and four voice heavy harmonies! Ever since their first concert in Harlem’s “Shrine” in February 2014, As Lolas are taking NYC over by storm. The band appears in NYC’s major venues like BAM, SOB’s, Nublu, Brooklyn Bowl, Subrosa, to name a few and toured Europe in 2014 and 2015. As Lolas play Brazilian psychedelic rock at it's best. Covering songs from Os Mutantes, Secos e molhados , Raul Seixas, Tom Zé, Rita Lee, Gilberto Gil, as well their originals, with their own spectacular vibe.

“I hereby declare that AS LOLAS Are undeniably Mutantes, The best part besides their musicianship is the fact that they will Rock your socks off!” Sergio Dias, (founding member of the legendary band “Os Mutantes”)

"As Lolas kick ass, they are a great band, they drew a crowd from the boardwalk and entertained the people like magic. Their musicianship, infectious energy and exciting set of Brazilian rock music got everyone dancing” Jen Gapay, producer NY Burlesque and Boylesque Festival and Summer events at Coney Island.

“I ended up at your show at NUBLU. It blew my mind. Thank you and looking forward to seeing you play again!” Sean, a fan!

Fabiana Masili: Brazilian singer and songwriter began working professionally at age 15 and has since performed in Brazil, Portugal and all over the US. She works with several successful bands like “Nation Beat”, “Brazooka” and “Maracatu NY” and performed regularly at NYC trendiest places like “Cafe Wha”, “Zinc Bar” etc. She is a real force of nature and has inspired the bands choice of songs, which she makes completely her own. http://en.m.wikipedia.org/wiki/Fabiana_Masili

Eliane Amherd, NYC based singer, guitarist and song writer from Switzerland. Her charm and strong stage presence have won over audiences everywhere she performs - from Asia to Europe, the US, Canada and South America, she is an international class act. She has a long time love affair with Brazilian music ever since she discovered an old cassette tape with Bossa Novas as a child back home. After moving to New York to experience its music scene first hand, she has become one of the hottest performers of NYC’s melting pot. The press claims: "Eliane Amherd simply has it all. Watch her rise as one of the brightest new talents on the scene” http://elianeperforms.com/

Viva DeConcini Italian - American guitarist, singer and song writer who is described by the press as "The love child of Little Richard and Joan Jett". She plays guitar like a flaming sword and sings like if Freddy Mercury had been a woman. Viva cut her teeth as a founding member of Cyro Baptista's ground breaking Beat The Donkey which deftly combined downtown NY aesthetic with Brazilian art-rock sensibilities.  She has played everywhere from Bonnaroo to Monterey Jazz Fest, and is one of the few women to be featured in the Guitar Player Magazine. http://www.electricviva.com/

Dawn Drake, the Slovenien-American bass player, percussionist, singer and songwriter studied in Ghana, Cuba and Brazil. She is best known as the band leader of “Dawn Drake & ZapOte” an original New York dance band who plays conscious songs that simmer in a palate of serious Caribbean, West African and Brazilian influences (to name a partial list). She is an artist who is on a "fascinating journey to bridge chasms of cultural and gender disconnect that plagues so much of pop music's body politic. To hear her music is to imagine early jam sessions between Laura Nyro and Carole King with Sly Stone and Sergio Mendes sitting in" -press quote. www.dawndrake.com

Rosa Avila grew up in Europe and Mexico. She started playing drums at age 16 and was a Junior Tennis player at the same time. She basically needed tennis rackets and drum sticks to let out the tons of energy that is now the rocking foundation of “As Lolas”. As a young drum student at the PIT Musician’s Institute in Los Angeles she has received many honors and awards which led to an immediate carrier as a professional drummer for artists like Glen Campbell , Debby Boone , Petula Clark and most notably the legendary American entertainer Andy Williams, with whom she performed an average of 300 shows a year from 1992 until 2008.

Also on stage with As Lolas is the great guitarist, bass player and composer Eliane Delage. Eliane is an accomplished musician with the ability to cross over many styles, but her love for Rock has been genetically tested and immutable over the decades. Her infectious command of sound and ability on the guitar is just the right dose when playing on stage.Growing up in Brasil, Eliane has accompanied many Brazilian artists and immersed herself in the sounds and rhythms of Brazilian culture, from the South's Bossa Nova to Bahia's Axé and Samba-Reggae. www.elianedelage.com”